Basics of Meshing in CFD

Discretizing a domain into small elements or cells is known as meshing. Meshing is a very important part of numerical analysis. If the number of cells in a meshed domain are high the accuracy of analysis will be greater. Mesh is kept fine in the areas where capturing the physics of phenomenon is important. Mesh independence is one of the most important step in meshing. Mesh Independence is achieved by refining the mesh till the value of required variable becomes constant. Mesh refining requires high computational capabilities. Mesh can be classified into different types based on the uniformity and shape. Definitions of some elementary terms of meshing are given below (D. J. 1996).

Edge: Boundary of a face

Face: Boundary of a cell

Cell: Control volume into which the domain is discretized.

Material data and source terms are assigned to cell zone whereas boundary conditions are applied on face zones.

Mesh is generated in the order given below.

Mesh independence is performed to see whether the size of mesh affects the solution or not. In this process, an initial mesh is generated and results are analysed for the conversion. If the conversion is not achieved, mesh is regenerated and checked to accomplish convergence. When the solution converges, mesh is refined (No of cells or elements are increased) to obtain better results. A residual limit can be set based on the problem to check for the error. With each refinement, results are obtained and compared to the results obtained with the previous mesh. If the results of two consecutive meshes are not same, mesh is refined again and again till the results become same. When the results for the two consecutive refinements are same, the previous mesh is believed to be generating accurate results.

TYPES of Meshing Based on Cell shape and Dimension:

Two dimensional mesh can comprise of triangular or quadrilateral elements.

In this type of mesh, cells are in rectangular shape. This shape is common in two dimensional structured mesh.

Two dimensional extruded models can be represented completely by the hexahedron and prisms as extruded quadrilaterals and triangles.

In geometry, a tetrahedron also known as a triangular pyramid, consists of four triangular faces, four vertices, four sides and six edges. This form of mesh can be auto-generated

This shape have four triangular faces, one quadrilateral face, eight edges and five vertices. They are utilized as transition elements between triangular and square elements. They are also used in hybrid grids.

This type of cell have six vertices and nine edges bounded by three quadrilateral faces and two triangular faces. It is very effective in resolving boundary layer.

This type of cell have eight vertices and twelve edges bounded by six quadrilateral faces. Hexahedron mesh is considered best among all and it give the solution with highest accuracy.

The triangular prism and pyramid zones can be considered computationally as degenerate hexahedrons, wherein some edges were decreased to 0. Other degenerate sorts of a hexahedron may also be represented.

It is a three dimensional element which can have any number of edges, faces and vertices. Large number of calculations are performed due to large number of neighbouring cells. This mesh is created to obtain more accuracy in calculations. 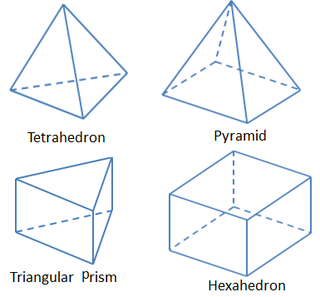 In a uniform mesh, shape of cells throughout the domain is same whereas non-uniform mesh uses a blend of different mesh shapes. All the numerical approaches are designed to produce as small amount of errors as possible. These errors arises due to non-linear behaviour of the solution and large gradients of the physical properties in some places of the domain. This means that we need to handle small large-scale physical phenomena at the same time and these different phenomena can have a strong coupling with each other (D. J. 1996).

The grid labels the elements or cells on which the flow is being solved.

• Represent the domain in a discrete manner

• Elements are grouped into boundary zones where boundary conditions has to be applied.

• The mesh affects the rate of convergence, computational time and accuracy of the solution.

A structural grid spreads over a domain in a regular manner. In two dimensional meshing, structural grids have quadrilateral elements whereas in three dimensional structural meshing the elements are of hexahedron type. Structural gird is extremely space efficient. They display better solution convergence and generate accurate numerical results. 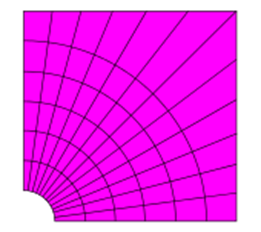 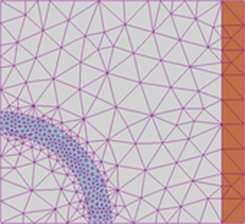 Email ThisBlogThis!Share to TwitterShare to FacebookShare to Pinterest
Labels: fluid and hydraulics