In Jung (2014) work the flow rate was chosen as 0.0001. Iteration of disc outer radius and fluid angular velocity was done to find the volumetric flow rate for single disc spacing. In order to obtain the overall volumetric flow rate, the disk configuration was multiplied by the overall number of discs, giving appropriate efficiency and torque values. There was an iteration of head and flow speeds. Via the nozzle, fluid makes its way and is guided between the discs. The fluid hits the disc at an inclination nearly tangentially to the outside of the rotor, locating the jet's absolute and radial velocity. It measured the torque and generated power.

Jung (2014) worked on a CFD model of a Tesla turbine based on the design parameters mentioned above. In Solidworks2013, 2 domains were formed. The revolving domain comprised of a rotor assembly and the stationary domain composed of a simplistic nozzle in the outer casing. Figure below illustrates the layout of two domains. 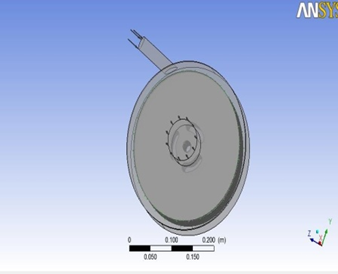 In Jung (2014) work fluid parameters are provided to illustrate the contact of the disc with water. The value of the dimensionless structure constant R was found to be -0.042, which implies reasonable model precision and important viscous effects. The performance of the streamlined nozzle was 77.7%. The velocity streamlines and pressure gradient are seen in Figures below: 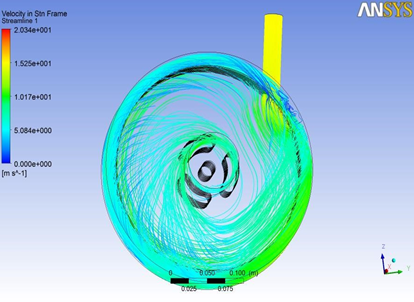 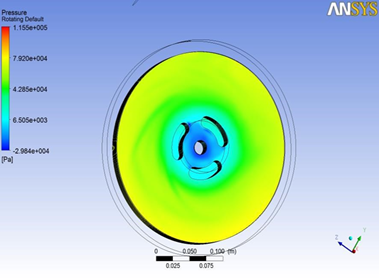 Lampart (2011) employed a CFD tool to observe the dependency of different operating parameters on the total sum of injecting nozzles. Nitrogen was the working fluid used in Organic Rankine Cycle. Three sum of nozzles 2, 4 and 6 were used in the study. The nozzles were located along the perimeter of flow inlet and were at equal distance and are tilted at 10° from the tangent of the circumference.  The results of the study showed a good correlation between less number of nozzles and higher flow efficiency under different operating conditions. The indicative of relatively low power transfer efficiency and losses occurring under same flow entrance locations, yielded the shortest flow path of six nozzles turbine that happen inside the flow space that leads to relatively low power output as compared with the lesser amount of nozzles alongside turbine. For the off-design operating mass flow situations, the stimulated models show the increased efficiency of flow. This happens to be in agreement with the interpretation of better efficiencies being accomplished at smaller flow directions proposed by Rice et al. However, at low flow rates in the vicinity of 0 kg/s, the study could not achieve the functioning features of the friction-type micro turbine. Moreover, the characteristics of operation of the turbine as soon as flow approximates to 0 kg/s and established the efficiency to react 0 at such conditions explored by many other investigators including Harwood (2008). The contradictions are made on the research work of Rice and Crawford (1974) to keep increasing the turbine’s efficiency as the flow reaches the zero flow rate state.

A numerical approach is used to study the effect of two geometric parameters, the thickness of disc and distance between disc spacing, that influences the performance of Tesla multichannel turbines. Two types of turbines were under study; 1st was a one-to-one turbine and 2nd was a one-to-many turbine, to check the aerodynamic performance and flow behavior in terms of geometric variations. The outcomes show the reduction in isentropic efficiency of the one-to-one turbine to some extend while the one-to-many turbine becomes significantly inefficient. For instance, the turbine having a 0.5 mm distance between disk, the drop is below 7%, and afterward, the variations in the thickness of the disc from 1 mm to 2 mm, resulting in the drop of 45% to its actual value. The increment between the distance of disc spacing results in the variation in isentropic efficiency of both turbines in the manner of initial increment than decrement later on. An ideal value and higher range of efficacy exist to attain maximum isentropic efficiency and to maintain it at the upper level. The ideal distance of disc spacing in the one-to-one turbine is 0.5mm that is relatively lower than a one-to-many turbine having disc spacing of 1mm with a constant thickness of discs that is 1mm. The summary for designing a multichannel Tesla turbine is that the distance between disc spacing must be in the range of its higher efficiency level and the criteria for selecting the thickness of disc must be balanced on the parameters of aerodynamic performance and mechanical stresses. 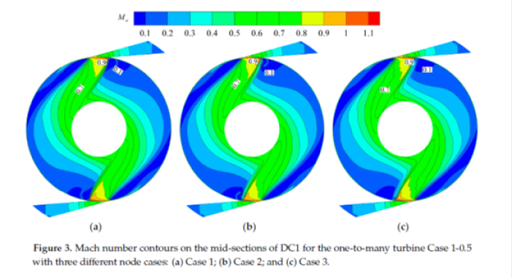 The flow pattern in the Tesla turbine is illustrated in the figure below, having an inlet flow rate of about 1.32 Kg/s and 0..6Kg/s respectively. It is concluded that by keeping the inlet flow rate constant, there is a reduction in rotational speed. The increase in width of the distribution region of high-speed fluid towards the outer rim of turbine discs also increases the region and capacity of liquid doing-work. There is high-speed fluid flow from the outer rim to the center when the inlet flow rate is larger. This results in a lowering of fluid capacity and region. That is the reason why the rotational speed must be low to enhance the efficiency of the Tesla turbine for converting energy. 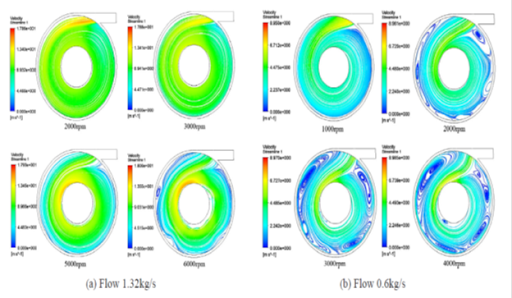 A figure provided below shows the domain pressure of fluid having an inlet flow rate of 1.32Kg/s. The increment in domain pressure of the fluid is observed by increasing the radius of the disc. The maximum pressure at the inlet of the turbine always appears near the outer rim. The maximum pressure continuously increased by an increment in speed of rotation and there is an absolute fluctuation in the distribution of pressure at the outlet while the fluctuations in velocity are significant at a higher rotation speed. There are small variations in domain pressure distribution of fluid between several flow rates. 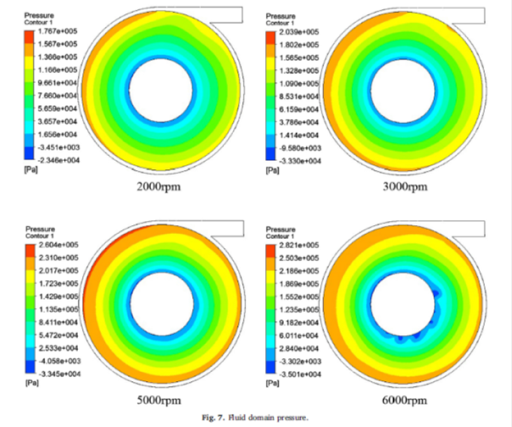