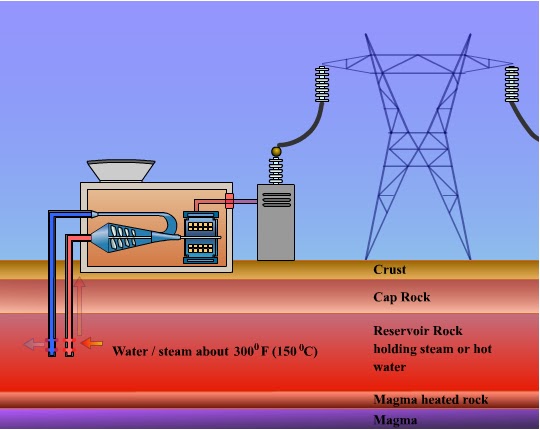 According the theories core of our earth is in molten form and volcanic action taking place at different location on the surface of the earth are prove to these theories. There is water and other resources above the core and because of core high temperature water start to boil and get into vapor shape as it has no way to go so it start to gather in place and create huge pressure and this pressure when taken up to the ground, is used by the turbine to move the generator and produce the electricity. Geothermal energy is considered renewable because the heat is continually replaced. The water that is removed is put right back into the ground after its heat is used.

Direct dry steam is the oldest type of geothermal power plant. In this type of plant hot steam is piped directly from geothermal reservoirs to steam turbine which drives the generator that produces electricity. This plant emits only the steam and very small amount of gases.

Flash and Double Flash Cycle got its name from the way of its working. Flash and Double Flash Cycle use water that's between 300 and 700 degrees Fahrenheit (148 and 371 degrees Celsius) to make electricity. Water is sprayed into a tank which is held at a much lower pressure than the water, causing some of the fluid to rapidly vaporize which is also called flash. The vapor then moves to a turbine, which drives a generator to produce electricity. If there is any liquid left in the tank, it can be flashed again in a second tank called the double flash to extract even more energy.

Binary Cycle power plant is for those geothermal places which have moderate temperature (below 400 F). Binary Cycle use the concept of heat exchangers, water at moderate temperature transfers its heat to a low boiling liquid and vaporized it, which then move forward to drives the turbine. There is a close loop of this system due to which nothing is eliminated in the atmosphere. Moderate-temperature water is by far the more common geothermal resource, and most geothermal power plants in the future will be binary-cycle plants.

As the geothermal energy resources are deep under the earth and to reach them you need a path that’s why the first component of a geothermal plant is the geothermal vent. Geothermal vent is a deep well drilled into the Earth to extract the steam energy. A geothermal plant may have two goals for its vent; most of the power plant draws superheated and pressurized water upward, they are called flash steam plants and others use simply dig far enough underground to reach a point where the Earth is warm enough to boil water, they are called dry steam vents.

The steam is then passed through the separator where most of the dirt and sand carried by steam are removed.

A large steam turbine is used by all types of plants. High pressure steam causes the turbine to rotate. This turbine is attached to an electric generator, and as the turbine start to rotate the generator turns the mechanical energy into electric energy.

So our loyal reader that's was all about to day post hope you have enjoyed reading it. If you have any questions or we have missed any point or have make any mistake, you can mark them in the comment box below 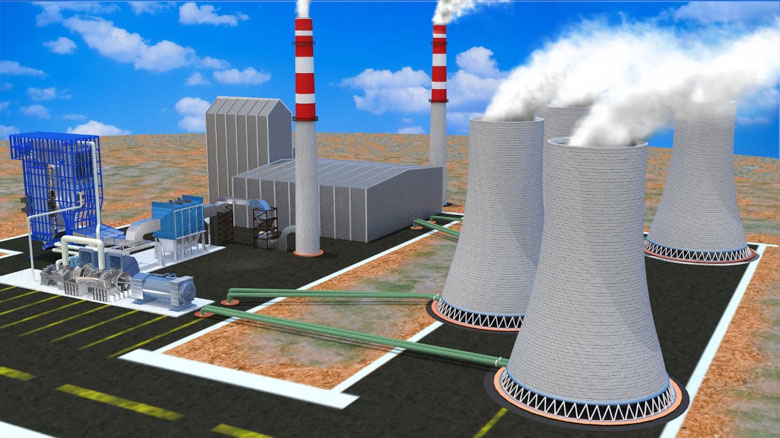