A structural member that is capable of resisting the bending load (load applied perpendicular to concerned axis) is called beam. In order to study about beams the two main point’s one where load is being applied and other where support is being provided must be studied. Based on the types of support beam has there is three basic types of beam.

Now in the above formula

I is the symbol of second moment of the inertia

1.      First step is the setting up of the apparatus for the experiment which involve placing the apparatus on horizontal place, attaching the beam, hanger and dial gauge.
2.      Second step is to add the weight in hanger to apply weight on beam. As the result beam will deflect from its position
3.      Record the deflection by noticing the dial gauge attached to the beam
4.      Repeat the step 2 and 3 for different weights

Graph between Displacement and load 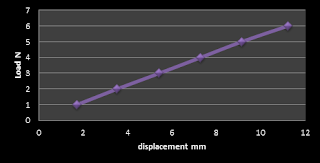 Based on the graph shown above it can be sad that there is linear relationship between displacement and load because it is shown in graph that when load on the beam is increase the deflection produce by the beam has also increased. From this it can also be said that higher the load more will be the displacement.