b. What are the main parts of an axial flow compressor

c. Describe the air flow through a centrifugal compressor

d. Describe the air flow through an axial flow compressor

e. What is a stage in an axial flow compressor and describe the air flow through a stage

f. Given an explanation as to why axial flow compressor rotor blades are twisted

i. What are the main advantages of  twin spool compressor

j. Given an explanation of the term compressor stall

k. Given the explanation of the term compressor surge

l. List three situation that can cause a compressor to stall

m. Given an explanation as how variables inlet guide vanes can reduce or stop a compressor from stalling.
Recommended: Gas turbine working with intake, compressor, combustur & Gears

Inlet
In the working of centrifugal compressor, the first part required is the intake mechanism for gas or air to enter inside. The intake is simply a pipe or ducts which direct and guide the flow of gas while entering in the centrifugal compressor. It may contain certain value, stationary vanes or airfoils for better efficiency and working. There are also certain temperature and pressure sensors and control instruments for better control and to get the intake as per requirement.

Centrifugal impeller:
It is that component of compressor for which it is known as centrifugal compressor. It is the main part and plays the major role by increase velocity and energy of working gases coming from intake. It consists of vanes/ blades which rotate at high speed and push gases toward the diffuser with high force.

Diffuser:
The purpose of diffuser is to raise the pressure of gases coming from the centrifugal impeller. The working gases coming from the impeller have high energy and of much higher velocity. This higher velocity gases are converted into high pressure by the principle Bernoulli’s equation. It consists of diverging nozzles which reduce the velocity but increase the pressure of working fluid.

Collector:
As the name indicates, its purpose is to collect the working fluid coming from diffuser and guide it to the downstream pipe. It may contain valves and control instruments to control the mechanism and working of compressor.

c. The working fluid (air) enters in the centrifugal compressor through simple pipe which guide it continuous and uniform entry. After that the moving impeller increases the velocity and energy and pushes it toward diffuser where the diverging nozzles decrease its velocity to increase pressure, then it move to collected which guide it to downstream.

d. In the axial compressor, rotor is turned at high speed to induce air from the intake and rotor blades raise it kinetic energy in the form of velocity. It is then directed toward stator passage to diffuse where kinetic energy converted into pressure. The stator vanes also guide the angle of flow for the next stage, normally the last stator vane serve the purpose of straitening the flow of air before entering in the combustion chamber.

e. Stage in compressor can be defined as the rotor blade followed by stator vanes. The air passes through rotor blades where it pressure ratio is increased to certain value and then it passes through stator vanes which also guide it to next stage. Each stage increase pressure ratio to certain fraction of required value. After passing through all stages, air get the required pressure.

f. The rotor blades are twisted from root to tip in order to obtain pressure gradient along the length and to regulate the uniform axial velocity of working fluid (air)

h.Centrifugal compressor:
It is simple in design and cheap as compared to axial compressor and also need very small power to start up but the energy losses between stages are higher.

Axial compressor:
The pressure can be raised to maximum required value by using more no. of stage as the losses between stages are minimum. It has high peak efficiency but its design is complex and also of heavy weight and costly.

i. In the twin (dual) spool engine, the compressibility problem is minimum as the rotation of low pressure compressor is slow and also this engine is lighter in weight.

j. Stall is the local disturbance in the flow of working fluid (usually air) that occurs due to back pressure and this effect the overall efficiency of engine.

k. The rapidly reverse flow effect of engine is known as surge. At this stage, the engine is unable to provide energy in the system to eliminate the system back pressure and this result in rise in vibration and temperature.

l. One main cause of stalling is the back pressure of surplus air and also due addition of foreign objects like birds, sand etc which causes erosion. Sometimes direct corrosion wears the tip clearance and tip clearance become greater at some places that starts the leakage of air through the tip clearance. The operation of air craft beyond its design parameters and operating procedures, just like giving sudden thrust or over fueling.

m. Variable intake guide vane serve the purpose of pre rotation of working fluid (air) before the impeller rotation. This actually guide and facilitate the air flow through intake so reduce the air disturbance during intake so stalling also reduces as air flow become more regular and uniform.

o. The purpose of bleed valve is to waster the extra air piled up between stages. When front stage pushes more air then the utilization of rear stage then extra air causes back pressure and stalling so, in order to overcome this problem, bleed valves are installed which remain open during start up and dump out extra air.

a. Describe with the aid of sketches, the construction of the following combustion chambers
1. Multiple
2. Tubo Annular
3. Annular

b. Compare the advantages and disadvantages of the three combustion systems. 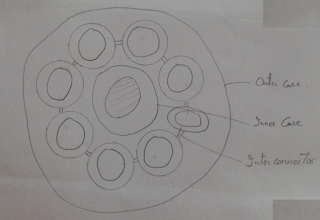 Tubo annular combustion chamber:
It consists of cans placed one after the other with ignition igniter and placed between the space of inner and outer air casing. Every can have eccentric rings having hole to pass air for cooling purposes. 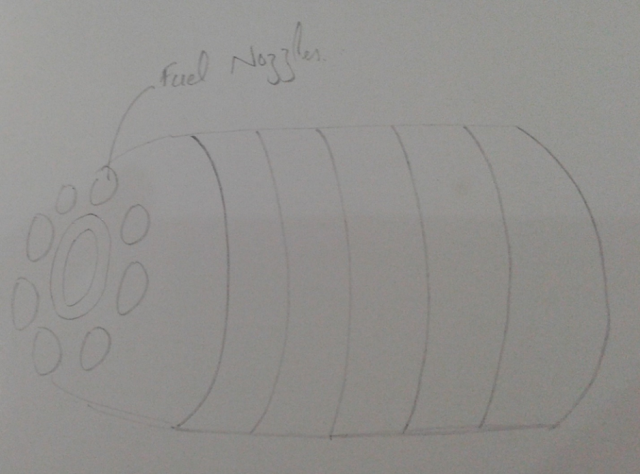 Annular combustion chamber:
This type of combustor is suitable for axial flow compressors. Due to its limited space, it permit small engine making. It contains single flame tube (liner) and this liner has inner and outer shrouds and also holes in the shrouds for secondary cooling. 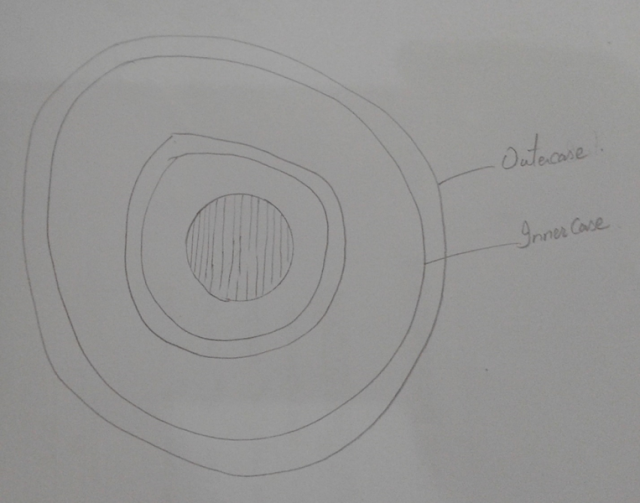 a. Describe with the aid of the sketches the use and operation of impulse type turbine blades

b. Describe with the aid of sketches the operation of reaction type turbine blades

c. Describe with the aid of sketches the use and operation of impulse/reaction type turbine blades

d. What is meant by the term creep deformation and creep strain curve and explain their relevance to the design and operation of the gas turbine blades

e. Given a basic description of how turbine blades may be cooled

a.In the impulse type turbine, the blades are shaped like bucket type and when fast moving working fluid coming from a narrow nozzle strikes the bucket shaped blade, it rotate or trend to rotate the turbine and fluid bounce back at an angle and even sometime at the same angle of striking. This causes maximum spinning on blades. The below figure illustrate clearly. 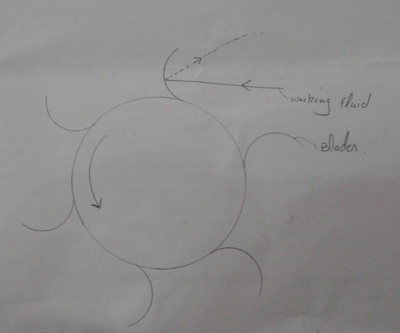 b.The working of reaction type turbine blades follows the newton third law of motion. The nozzles are attached to the moving rotor and as the nozzle fire the fluid outside, it produce a reaction force on the rotator and trend it to rotate. 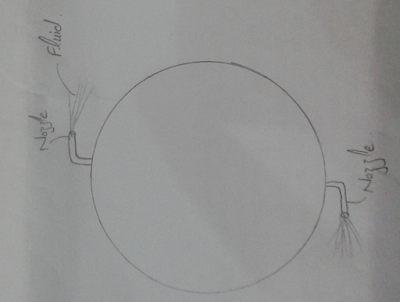 c.In the impulse type turbine, the blades are shaped like bucket type and when fast moving working fluid coming from a narrow nozzle strikes the bucket shaped blade, it rotate or trend to rotate the turbine and fluid bounce back at an angle and even sometime at the same angle of striking. This causes maximum spinning on blades. The below figure illustrate clearly.

The working of reaction type turbine blades follows the newton third law of motion. The nozzles are attached to the moving rotor and as the nozzle fire the fluid outside, it produce a reaction force on the rotator and trend it to rotate.

d.The permanent deformation of material due to high level of stresses. There are three stages. In the primary stage, the deformation ratio is high due to work hardening but this strain ratio become small and constant in secondary stage and in tertiary stage necking starts. The behavior of creep strain curve is shown in below figure. 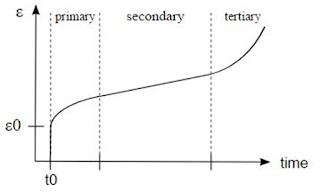 e.The air flow through the internal surface of blade and cooling of blade occur through convection from the inside. On the other hand, cold air passed through holes on the outside of blade to cool the external portion of blade.

a.Describe with the aid of sketches the function of the main components of an exhaust system as fitted to an engine that is fuselage mounted and operated at a subsonic speed

b.Explain how an air craft can fly faster than Mach 1 if the velocity of the jet stream cannot exceed Mach 1

c.Give a simple explanation as to why it is necessary to vary the area of a propelling nozzle on an engine that is fitted with an afterburner system. 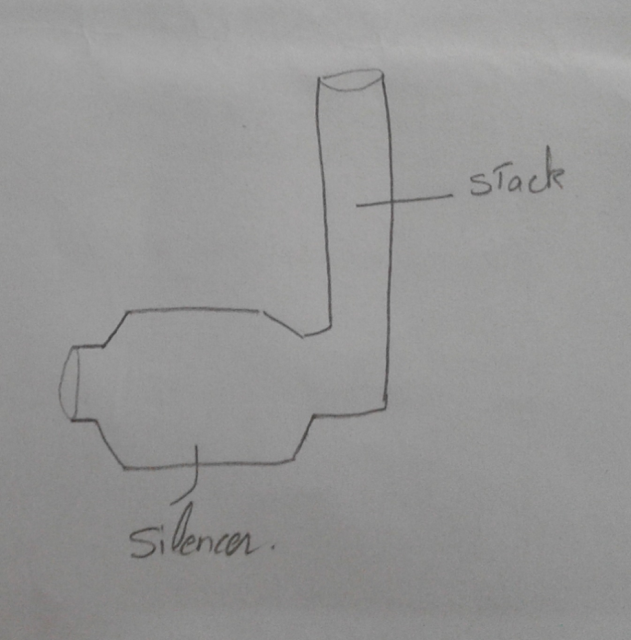 b.Air craft can fly faster than Mach 1 while the velocity of the jet stream remains at Mach 1, with the help of turbocharger. Due to turbocharger extra fuel is burned in the jet exhaust which increase the engine thrust and enable the air craft to fly above Mach 1

c.In order to give extra thrust using afterburner/reheat system, propelling nozzle area is increased to significant value to provide enough fuel that can make combustion enough for producing sudden thrust. If the area of nozzle is not increase the reheat system mismatch and causes stall in compressor.