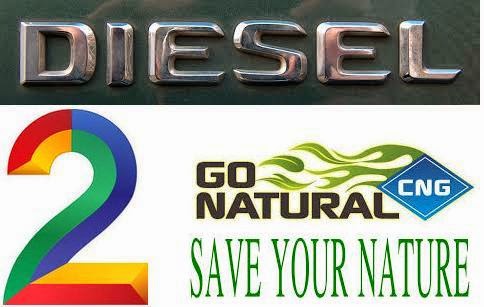 First step in the conversion of diesel engine to Natural Gas id to disassemble it because there a many parts that have to be replace and many parts to upgrade in order to make the new engine work properly For disassembling an engine you need a skill worker because it is really a difficult job to disassemble an engine is proper and safe way.

Diesel engine relay on high compression ratio to produce the ignition that’s why they have high compression piston, long connecting rod and special camshaft. Natural Gas engine on the other hand use spark plug to produce the ignition. So there is a need of changing the piston, connecting rod and camshaft to produce the low compression ratio.
Diesel engine do not have spark plug and CNG engine need spark plug so there should be some redesigning of head suction to make a place for spark plug.
There are many other changes like changing gears in the gearbox to get the right gear ratios to suit a gas engine, the exhaust system to get the right catalytic converter, use the right vents and filler cap for gas instead of diesel and changing the fuel injectors and fuel pump and maybe the tank too.

The Camshaft Position sensor is typically located in the cylinder head of the engine and has a cylindrical portion that inserts into the head. The Crankshaft Position sensor is normally located in the timing cover or on the side of the block with a cylindrical portion that inserts into the block.
The timing gear is connected by chain, gears, or a belt to the crankshaft at one end and the camshaft on the other. It is marked with tiny increments all around its perimeter, which correspond to degrees of timing from the straight-up timing position of the camshaft and crankshaft. These marks assist the individual who is tuning up the engine to set the timing to the determined optimal timing degrees of the camshaft and engine designers.

Up till now all the changes which had to be made inside the engine has been completed now it is time to reassemble the engine. It is done step by step like the disassemble of the engine. A highly skill worker is needed for this job

Throttle body is a device use to control the intake of fuel in engine. They are installed just before the engine and controlled mechanically and electrically. In natural gas engine the controlled the amount of gas passes to engine

Gas mixture or fuel injection system is one which prepares the air and gas mixture according to the requirement that is according to power being produce by the engine.

9- Tuning of the engine (fuel and ignition).

Engine tuning is the adjustment, modification or design of internal combustion engines to yield optimal performance, to increase an engine's power output, economy, or durability. Tuning can describe a wide variety of adjustments and modifications, from the routine adjustment of the carburetor and ignition system to significant engine overhauls. At the other end of the scale, performance tuning of an engine can involve revisiting some of the design decisions taken at quite an early stage in the development of the engine.

So that’s was all about the conversion of Diesel engine to natural gas engine. We hope that you have understood each and every point about the conversion of engine. If we have miss any information or you think that you have more interesting information on this topic please feel free to comment in below comment box
Email ThisBlogThis!Share to TwitterShare to FacebookShare to Pinterest