Casting Defects And Their Inspection Methods 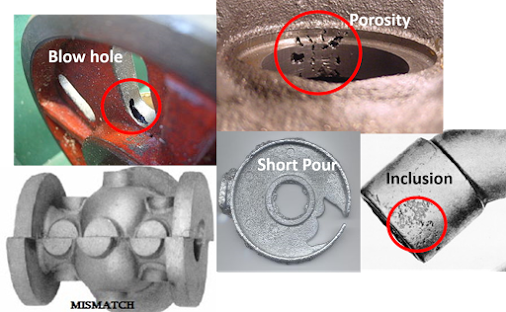 There are numerous opportunities for things to go wrong in a casting operation, resulting in quality defects in the cast product. In this section we compile a list of the common defects that occur in casting and we indicate the inspection procedures to detect them

Some defects are common to any and all casting processes. These defects are briefly describe in the following points

Misruns are the castings which solidify before completely filling the cavity. Typical cases includes

Cold shuts occurs when two portons of the metals flow together but there is a lack of fusion between them due to premature freezing. Its causes are similar to those of a misrun

Cold shuts results from splattering during pouring, causing the formation of solid globules of metal that entrapped in the casting. Pouring procedures and gating system designs that avoid splatting can prevent this defects

Shrinkage cavity is a depression in the surface or an internal void i  the casting caused by solidification shrinkage that restricts the amount of molten metal available in the last region to freeze. It often occurs near the top of the casting, in which case it is referred to as a pipe

Micro-porosity consists of a network of small void distributed throughout the casting caused by localized solidification shrinkage of the final molten metal in the dendritic structure. The defects is usually associated with alloy, because of the protracted manner in which freezer occurs in these metals

Hot tearing also called hot cracking occurs when the casting is restrained from contraction by a unyielding mold during the final stages of solidification or early stages of cooling after solidification. The defect is manifested as a separation of the metal at a point of high tensile stress caused by the metal inability to shrink naturally. In sand casting and other expendable mold processes, It is prevented by compounding the mold to be collapsible. In permanent mold process hot tearing is reduce by removing the part from the mold immediately after solidification


Some defects are related to the use of sand mold and therefore they occur only in sand casting. To a lesser degree other expandable mold processes are also susceptible to these problems.

SCABs are rough areas on the surface of the casting due to encrusting of sand and melt. It is caused by portions of of the mold surface flaking off during solidification and becoming imbedded in the casting surface.

PENETRATION to the surface defect  that  occurs when the fluidity of the liquid metal is high and it penetrates into the sand mold or sand core. Upon freezing, the casting surface consists of a mixture of sand grains and metal. Harder packing of the sand mold helps to alleviate this condition.

MOLD SHIFT refers to a detect caused by a sidewise displacement of the mold cope relative to the drag the result of which is a step in the cast product at the parting line.

MOLD CRACK occur when more strength is insufficient and a crack develops into which liquid metal can seep to form a ‘fin’ on the final casting.


Tests in category include ;