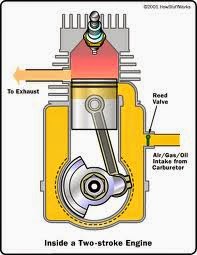 Two stroke engine executes two complete strokes within the cylinder while the crankshaft completes One revolutions for each thermodynamic cycle.

In the first stroke the suction and compression processes take place simultaneously. The suction is done through port named inlet port and the movement of piston from bottom dead centre to the top dead centre causes the fuel to be compressed.

In the 2nd stroke the combustion and exhaust takes place. Due to combustion the piston moves downwards and the exhaust also takes place in the same stroke. During the exhaust the fresh charge also starts entering the engine cylinder. The designing of the top of the engine is such that the fresh charge does not combine with the expelling one. This is done by taking the term known as cross flow

Starting from bottom the engine consists of a circular cylinder named as crank case. In crank case, counter weight is present that revolve to complete the cycles. It is connected to both fly wheel outside the engine and inside it is attached to the crank shaft that is further attached with the piston at gudgeon tube through connecting rod. The piston is movable with in the bottom dead centre and the top dead centre. Space named as engine chamber is the part above the piston. It is surrounded by some lined structures to keep the engine cool, these lines are called cooling fins. At the upper side of the engine a spark plug is present which is connected to the battery. The connection of spark plug to the battery is controlled by the movement of fly wheel. The piston is movable due to the presence of piston rings around the piston to avoid friction. The inlet and outlet ports are present on the same side of cylinder. However the fuel enters first into the crank case then by the creation of vacuum it is in turn sucked into the engine chamber with the help of fuel transport port. 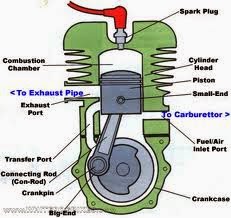 Following are some advantages of 2-stroke petrol engine.

•As there is only one idle stroke, horsepower developed in it is twice as that of 4-stroke.

•The work resumed during exhaust and suction stroke to overcome friction is same.

•There is more turning movement of crank shaft.

•In this engine there is no valve but ports, which one is closed by motion of piston itself.

•Easy manufacturing as compared to 4-stroke petrol engine and overcome.

Following are some disadvantages of 2-stroke petrol engine.

•It is high speed but less efficient.

•Due to the loss of unburnt gasses it is harmful to environment.