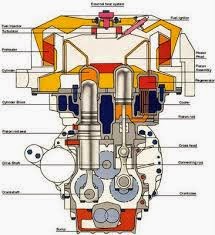 Classification of I.C Engine by Fuel:-

Classification of I.C Engine by Ignition:-

Classification of I.C Engine by Stroke:-

Cylinder:-   It is the main component of I.C engine. The combustion take place inside the cylinder.

Connecting Rod:-      The connecting rod connects the piston to the crankshaft.

Crankshaft: -   Crankshaft convert the reciprocating motion  of the piston to the rotary motion of the crankshaft

Inlet Valve:-    Inlet valve is located in the top of the cylinder. The air fuel mixture enter the cylinder  through the intake valve

Spark Plug:- The spark plug supplies the spark that ignites the air/fuel mixture so that combustion can occur.

Piston Rings:-
•Piston rings provide a sliding seal between the outer edge of the piston and the inner edge of the cylinder. The rings serve two purposes:
•They prevent the fuel/air mixture and exhaust in the combustion chamber from leaking into the sump during compression and combustion.
•They keep oil in the sump from leaking into the combustion area, where it would be burned and lost.

Top Dead Centre:-
It is the lowest level in the engine cylinder up to which piston lowers. In other words the extreme lowest level that a piston can achieve is called top dead center.

Stroke:-
It is the distance covered by the piston from the top dead centre and bottom dead center. it is named as stroke length or simply stroke.

Clearance Volume:-
The volume of the level left at the top dead centre position of the piston is termed as clearance volume.


(a)Induction or Suction: -   It is the process in which the fuel is introduced into engine chamber. The introduction of fuel may be through valve or port. In two stroke engine it is done by moving piston from bottom dead centre towards top dead centre. During this the port is opened as fuel gets into the cylinder. While in four stroke engines, the movement of piston from top dead centre to bottom dead centre causing a vacuum or suction that is why this is also known as suction cycle or suction function,

(b)Compression or Working: - It is the process in which the fuel that was introduced into the engine cylinder is compressed, thus volume is decreased, so for both type of engines it is the movement of piston from bottom dead centre towards the top dead centre. After the top dead centre the volume left is known as clearance volume.

(c)Combustion:-
It is the only process in which the engine does work onto the surroundings. Simply it is the only working process of the engine cycle. The source of combustion makes difference in the engines. The process is also called ignition process. There are two type of ignition or combustion processes i.e. spark ignition or compression ignition. As the name indicates that the first type of combustion is carried out by the spark of electricity. It is done in all type of petrol engines. While the second one is carried out by the compression only, this process takes place in diesel engine.

(d)Exhaust: -
After the combustion of fuel the burnt gases are expelled out of the engine chamber either by outlet valve or by the outlet part. It is should be kept in mind that the inlet volume would be equal to outlet valve for best efficiency.

Internal combustion engines are most commonly used for mobile propulsion in vehicles and portable machinery.In mobile equipment, internal combustion is advantageous since it can provide high power-to-weight ratios together with excellent fuel energy density.

Generally using fossil fuel (mainly petroleum), these engines have appeared in transport in almost all vehicles (auto mobiles, trucks, motorcycles, boats, and in a wide variety of aircraft and locomotives).