Conduction can be defined as the transfer of electrons from one place to another under a potential difference or heat gradient. It is one of three modes of heat transfer between two or more bodies at different temperatures. The other two modes of heat transfer are convection and radiation. Generally, in solids conduction is due to the vibrations of molecules and motion of free electrons. Metals have high number of free electrons which explains that why they are good conductors. Thermal conductivity is the extent by which a substance can conduct heat or electricity. Solid, specifically speaking metals, have high thermal conductivity whereas gases have low value of thermal conductivity. The formula for Fourier Law of heat conduction can be given as

A = Cross-sectional area of the conduction, [m2]

dx = Thickness or length of the material specimen, [m]

There are two types of techniques which are used to measure the thermal conductivity of a material. The first one is steady-state technique and the second one is non-steady or transient technique.

Increase and Decrease in Thermal Conductivity

In the case of gases, increase in temperature will increase the amount of collisions amongst molecules. Thus it increases thermal conductivity.

Make it sure that the main switch is initially off. Then insert the specimen whose thermal conductivity is to be measured. Then insert the intermediate section into the linear module and clamp it together.
Install the temperature sensors T1 until T4 to the test module and connect the sensor leads to the panel.
Connect the heater supply lead for the linear conduction module to the power supply socket on the control panel.
Turn on the water supply and ensure that water is flowing from the free end of the water pipe to drain. This should be checked at intervals.
Turn the heater power through control knob on control panel to the fully anticlockwise position.
Turn on the power supply and the main switch; the digital readings will be displayed.
Switch on the heater and turn the heater power control and allow sufficient time to achieve steady state condition before recording the temperature at all temperature points as well as the input power reading on the wattmeter (Q). This procedure can be repeated for other power inputs. After each change, sufficient time must be allowed to achieve steady state conditions again.
Use the formula given above to calculate the value of thermal conductivity for all sets of recorded data.

Calculated Results: Results calculated above are given in the table below

In the graph it can be seen that the temperature decreases along the length of the specimen. Moreover, the thermal conductivity is decreasing with the increase in temperature gradient along the surface of the specimen. The point on the material where thermocouples are inserted or mounted are not known. Therefore the gradient of the temperature is not quite linear. The other reasons of non-linearity will be discussed in detail in the sources of error section. 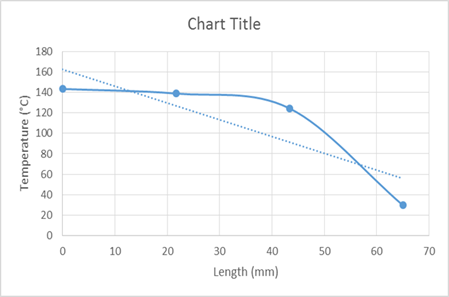