How to Keep a Hundred Axle Modular Transporter’s Platform Horizontal 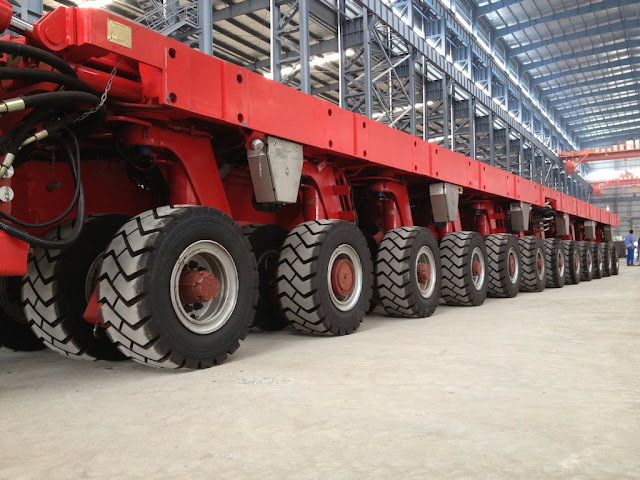 Have you ever seen a modular trailer with hundreds of axles? That is a perfect description of self-propelled modular trailers (SPMTs). The heavy haulers have the capacity to transport the heaviest loads from the land to offshore locations. So, how did the first self propelled modular transporter come about? Before the 1970s, engineers would fabricate pieces of large processing plants on site. This was possible because most of the projects were onshore. However, as engineer started working on offshore projects, heavy transport solutions were necessary. Engineers now fabricated large equipment on land. They then use modular transporters to move the equipment to the offshore destination. Read on and discover everything you need to know about heavy module transporters

A modular trailer has different modules with 4 or 6 axle lines. The axle lines are categories into three types. The types include freewheeling, braked, and propelled axle lines. In a freewheeling axle type, the axles are always free to move in any direction. The PPU controls the acceleration and braking systems separately. For propelled axle lines, the PPU transmits power to the axles for them to function. In the braked axle type, the axles are always in a braked position. Hence, the trailer remains static. When a SPMT is ready to move, the PPU powers the axles and removes them from the braked position. The capacity of each axle line varies between 36 tons and 48 tons. Most SPMTs have a maximum loading capacity of 40 tons for each axle line.

The lifting height of self propelled modular trailers is approximately 500mm. The platforms do not bend when loading and are torsion-free. The platforms are specifically designed for direct loading. Self propelled modular transporters get power from their Power Pack Units (PPUs). The power is distributed to the electrical and hydraulic systems. The hydraulic system control the braking system, wheel steering, and the axle height. The diesel engine (Z320) in SPMTs has a capacity of 350kw. SPMTs are modular, which means that they coupled from one end to another or from side to side. The coupling depends on the transportation configuration required.

How SPMTs Function and Remain Horizontal

The engine in SPMTs powers the hydrostatic drive systems. The transporters have several hydraulic connectors that link the power pack unit (PPU) to each self-propelled modular trailer. A trailer can have 3 or 4 hydraulic fields to keep it stable. The motor in the modular trailers pushes the flow of fluid in to a rotation movement. This way, the power from the PPU is transmitted to several SPMTs at the same time. In addition, when several modular trailers are linked together, they can be moved without a gear mechanism. The operator reverses flow of the fluid to reverse the trailer. No gearshifts are required to shift trailers from one movement to the next. 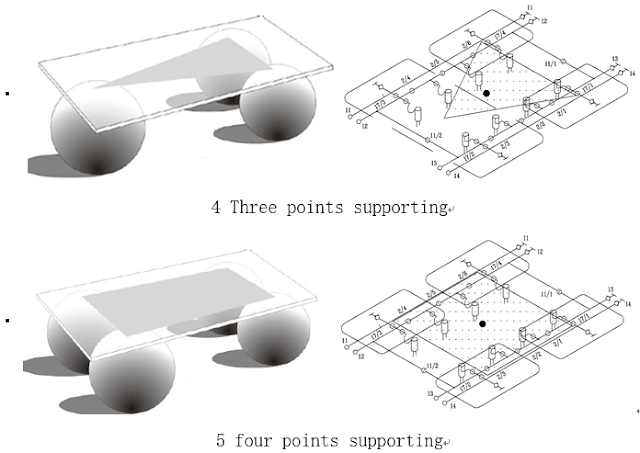 Each axle line has a suspension that is linked to the hydraulic system. Hence, the modular can be raised or lowered depending on the terrain. If there is an obstacle ahead, the PPU is raised to a certain angle. The suspension in the axle lines keeps the SPMT flat or horizontal when the axles rise or lower to cross obstacles. Modular trailers have dozens of wheels. A computer controls each wheel individually such the weight of the load is distributed evenly. Each wheel can swivel or steer independent of other wheels. It can turn, spin in a place or move sides. A pair of wheels can rotate 360 degrees around the point of support. The wheels of modular trailers move independent of each other. The wheels in some designs of modular trailers can telescope independently. Consequently, the load remains flat as the trailer moves no matter the terrain of the road.

Some self-propelled modular transporters have a driver cabin. A designated and trained driver controls the trailer’s movements from the cabin. A hand-held device or control is used to control some designs of SPMTs. In case the load is too heavy or too wide for one trailer, several SPMTs are combined. A computer that has many steering programs controls most SPMTs. The hydraulic flow from the PPU powers the steering programs. The steering programs include individual axle movements, circular drive, and transversal drive.

Benefits of Using of SPMTs in Construction

SPMTs are used in many industries but the construction has benefited more from the introduction of the heavy transporters. Bridges are now constructed off line and then transported to their right place using SPMTs. SPMTs can carry the heaviest loads. The trailers move at a walking speed and hence they interfere with the flow of traffic when on the road. The transporters can lift and transport entire bridge sections. In the end, the bridges constructed off site look and work the same as those constructed on location. When SPMTs are transporting bridges, the tolerances are kept very tight. The operators must ensure that the tolerances are tight such that there is not excess pressure on the bridges. At the same time, the pressure should be enough to allow the trailer to move an optimum speed.

Some states like Utah have used SPMTs in their construction projects because of their numerous benefits. One of the benefits is the reduction in closure time. Large bridge sections are moved to location on time, which eliminates unnecessary delays. In addition, SPMTs reduce user costs, improve the safety of construction workers, and improves accessibility. When bridges are completed, users can access new places easily. The presence of SPMTs allows bridges to be completed off site. This in turn reduced the amount of materials required to complete the bridges. Prefabrication construction components allow concrete components to be cured for longer periods.

Construction plant operators have more control of the environment when prefabricating components on an offline location. On-site construction limits constructers especially when bridges are required on roads that are already in use. A controlled environment has further benefits of improving quality and reducing maintenance needs. State governments get favor with the public because they are able to construct and install bridge speedily. One of the most recent projects where SPMTs were used to move bridges was in reconstructing the Rawson Avenue Bridge. The bridge is 138 feet wide and 188 feet long. The bridge was in two spans that weighed thousands of tons each. Two lines of self-propelled modular trailers were used o move the two spans to the site. Each line has 6 SPMTs coupled to accommodate the length and width of the bridge spans.

Self propelled modular trailers can lift and transport the heaviest loads especially in construction plants. The heavy haulers have PPUs that power their hydraulic drive systems. Some SPMTs have a central control panel or a hand device while computer programs control others. The control system moves each axle line independently. Hence, axle lines can be lifted or lowered independently when there are obstacles on the road. With this kind of control, the platform of SPMTs remains flat on all terrains. SPMTs are widely used in the construction industry especially in constructing bridges. The high loading capacity enables them to carry large bridge sections from offsite plants to their final location. The benefits of the using SPMTs in construction include increased completion speed, reduced raw materials, and a controlled environment.

Author  Karas Sh
Focusing on Mechanic. Writing many articles about transportation machinery like low bed trailers, Dolly semi-trailers and LNG/CNG/LPG tanker trailers. And now work as a writer for ANSTER. Once worked in trucking and machinery industry

Email ThisBlogThis!Share to TwitterShare to FacebookShare to Pinterest
Labels: Mechanics